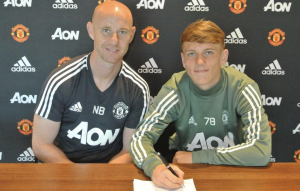 Teenager signs deal with the Reds

Ethan Galbraith has put pen to paper on a professional deal with United after an impressive spell with the club which saw him win the goal of the month award for April for his stunning strike against Manchester City.

The Northern Irish teenager has made 15 appearances for the under 18s side, earning rave reviews along the way including in the final against Chelsea.

Galbraith who has recently turned 17 noted:

“It’s a proud moment for me and my family,” he told ManUtd.com.

“Growing up as a young kid, obviously I always wanted to play football – especially for the biggest club in the world as well.

“I’m very proud and just want to push on from here. It’s been a great year. We won the league but, obviously, that’s a bonus. I just struck it well against City. I didn’t know what to do when I was celebrating because it was my first goal for the club as well, but it was very exciting!

“I’ve settled in well with the family I’ve moved in with and it’s all been great.”

Galbraith will be hoping to follow in the footsteps of academy graduates Marcus Rashford and Jesse Lingard who’ve been an integral part of Jose Mourinho’s side this season.

Coming from Northern Ireland, the teenager follows in the footsteps of many of United’s most talented and popular players including George Best and Norman Whiteside.

Mourinho has been criticised by some fans this season for not giving more young players a chance after their were no debuts giving to academy graduates during the season, despite the likes of Angel Gomes and  Tahith Chong impressing and being expected to feature at some point for the senior side.

It may be some time before we see Galbraith near the first team but United fans can be pleased the club continues to seek out the best young talent and do their best to keep hold of it.