7 Countries That Have Manchester United Players at the World Cup

Manchester United are set to have players from seven different countries involved in the 2018 World Cup finals in Russia this summer.

Which nations have Red Devils representations in their ranks? We take a look.

Aged just 20, Rashford is the youngest Red Devil set to feature at the World Cup finals with England trading around 16/1 with most bookmakers to win the tournament. Young, meanwhile, is the oldest United player called up by any country at 32.

World Cup Group G is going to pit Old Trafford clubmates against one another as Belgium – who share United’s nickname – call on a couple of Jose Mourinho’s men. Combative midfielder Marouane Fellaini, who is out of contract this summer, is joined in Belgian ranks by Romelu Lukaku.

As members of their country’s so-called Golden Generation, big performances are expected of these other Red Devils under ex-Swansea City, Wigan Athletic and Everton manager Roberto Martinez. Lukaku is already the national team’s record scorer and he’s still only 25! The World Cup betting offers Lukaku at 18/1 with many bookies to be top scorer at the tournament finals after scoring a career best 27 club goals this season.

United has briefly been home to legendary Swedish strikers Henrik Larsson and Zlatan Ibrahimovic in recent years, yet their sole representative from this Scandinavian country for Russia is defender Victor Lindelof. The centre half, who can also play at right back, played a key rearguard role in helping Sweden qualify when they shocked Italy over two legs in the play-offs.

There’s the unenviable task of playing Brazil in World Cup Group E for Serbia, so a big game is needed from United anchorman Nemanja Matic. Signed by Mourinho from former club Chelsea last summer, he has brought an assured and physical presence to the Old Trafford engine room.

Left-footed centre back Marcos Rojo has been on the comeback trail from a serious knee injury this season, but Argentina have had no qualms about selecting him. That flexibility to play in two defensive positions means he’s in Jorge Sampaoli’s squad despite a lack of first-team football at club level. The South Americans are 10/1 (Betfair) chances to lift the World Cup after being thwarted by Germany in extra time of the 2014 final. 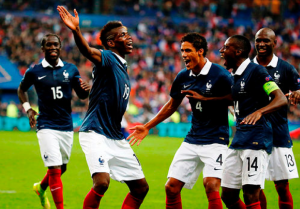 Didier Deschamps’ Les Bleus midfield is built entirely around Paul Pogba. It’s high time he lived up to the hype and promise he showed four years ago at the last World Cup in Brazil. United’s record signing will hope to help 13/2 shots France to go one better than being Euro 2016 runners-up here and win the tournament.

David de Gea is Spain’s undisputed number one since replacing the long-serving Iker Casillas in goal. Adored by Red Devils fans, his shot stopping is also hugely respected by his fellow Premier League footballers who have voted him into the last four consecutive PFA Teams of the Year. La Roja are generally found at 6/1 in the World Cup outright betting.