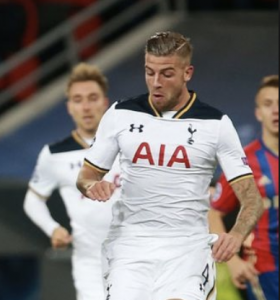 One of Manchester United’s most protracted summer transfers looks like it could be coming to an end with the news that the Reds’ haven’t given up on their pursuit of Tottenham’s Toby Alderweireld.

The Spurs’ defender has reportedly been at the top of Jose Mourinho’s wish list for several months, but while the signings of midfielder Fred, full back Diogo Dalot and reserve keeper Lee Grant were wrapped up quickly, this one is taking a little longer.

“Negotiations for Toby Alderweireld broke off weeks ago as the price became too high for a defender whose contract expires next summer, but there is a feeling within the club that a deal is still there to be done.”

“There is a similar approach to the transfer of Juventus full-back Alex Sandro, with the Old Lady now understood to have set a price at which they would sell the Brazilian, and United seeing him as a perfect addition if Mourinho decides he needs to upgrade the left-back position.”

News that United also remain interested in a left back will come as no surprise, Luke Shaw enjoys a love hate relationship with Jose Mourinho that seems to be more hate than love while Ashley Young is the wrong side of 30.

With United finishing 19 points behind City last season the chances that Mourinho will see a midfielder an unproven youngster and a third choice goalkeeper as enough to bridge that gap are highly unlikely.

Spurs are renowned for playing hard ball in the transfer market with their Chief Executive Daniel Levy having a reputation as one of football’s shrewdest operators when it comes to getting the best deal possible for the club.

Just how much United are willing to pay for a 29 year-old remains to be seen but it seems there’s still life in the deal yet.