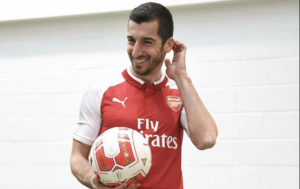 Henrikh Mkhitaryan has hit out at Jose Mourinho claiming he was happy to leave Old Trafford due to the manager’s style of football.

To be fair to the Armenian international he’s every right to feel aggrieved after being brought in by Mourinho last season from Borussia Dortmund as a potential talisman for the Reds, Mkhitaryan struggled to truly establish himself in the first team.

Despite several impressive games in last season’s successful Europa League campaign and THAT scorpion kick goal in the Premier League, Mkhitaryan found his chances often limited and failed to truly justify his place in the starting XI on a regular basis.

After moving to the Emirates as part of a deal that saw Alexis Sanchez arrive at Old Trafford, Mkhitaryan has fired a few shots at his former manager – hopefully with a bit more accuracy than his crossing was prior to his move to North London.

“When I heard I could swap Man United for Arsenal, I said, ‘Yes, I want to do that’, I didn’t think twice.

“It’s important for me to play in an offensive team. I’d missed playing offensively.”

It’s unlikely Mourinho will be overly bothered by a player he sometimes dropped for weeks at a time being a tad bitter towards him, after all there’s only so many feuds one man can physically engage in.

For many United fans Mkhitaryan was a player who flattered to deceive, for all his ability, especially with the ball at his feet, his passing often let him down and most of his best displays came against sides that won’t be troubling the Champions League anytime soon.

The former Dortmund man may be in a more ‘offensive’ minded team, but he’s also in one that’s miles behind United in the league and who would happily have kept Sanchez and ignored any offer of a swap had the Chilean not been so determined to leave.

This whole exercise seems like a way of trying to impress the Arsenal fans, we’ve seen it all before and it doesn’t end well.